This article is updated regularly. Bookmark it (Ctrl + D) to get redirected to the latest version.

The best graphic cards for gaming?

By that, I mean the graphic cards that offer the best performance in video games.

I do realize that you may not have the time to read reviews and to understand graphic card specifications.

Why I write this guide for you: To help you save your time and money by doing the research for you.

Prices for B&H as of January 7th 2020. Click on Amazon links to see prices. Note that I get commissions for purchases made through links in this post. Prices and availability are subject to change.

Click on any of these links to jump to the section that interests you, or scroll down to see them all, in this order.

The Best graphic cards for gaming: 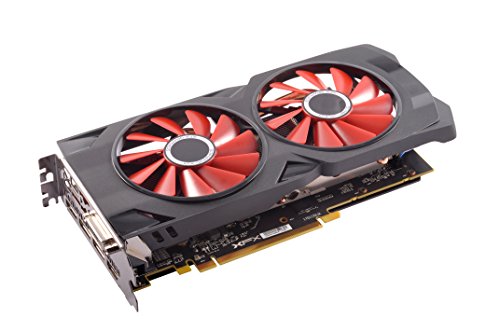 Above $140, it is too close in price to the more powerful Nvidia’s GeForce GTX 1650 Super, which sells for $160 and offers performance around the Radeon RX 580.

What video games can the Radeon RX 570 4GB run smoothly?

It’s capable of running newer games smoothly at a resolution up to 1600 x 900 smoothly with high frame rates.

It will run games at 1920 x 1080, but you may have to turn down visual quality and the game play might not be as smooth, with lower frame rates, depending on how demanding the game is. 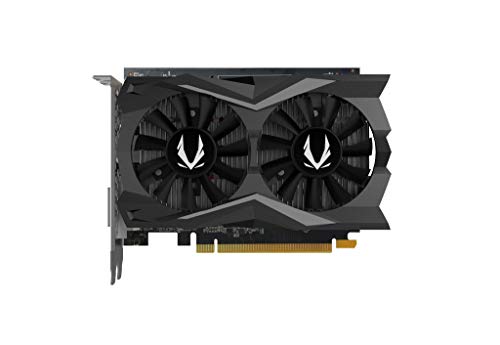 Performance wise, it trades blows with the Radeon RX 580, while costing less and consuming way less power, resulting in a more quiet card and a lower electricity bill.

Considering the ever so slightly better performance and lower cost of the the GeForce GTX 1650 Super, I currently recommend the GTX 1650 Super over the Radeon RX 5500 XT.

What video games can the GeForce GTX 1650 4GB run smoothly?

It’s capable of running newer games smoothly at a resolution up to 1600 x 900 smoothly with high frame rates.

It will run games at 1920 x 1080, but you may have to turn down visual quality and the game play might not be as smooth, with lower frame rates, depending on how demanding the game is.

If you plan on running games 1080p with Ultra settings, opt for a graphic card with more memory.

For playing video games at a resolution of 1920 x 1080 with higher frame rates and higher visual quality
GeForce GTX 1660: 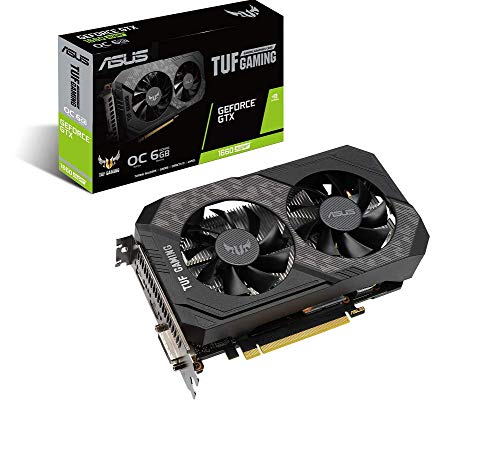 Then why is it called GTX 1660 Super and not say, RTX 1660, or RTX 2050?
Because to reduce die size and thus costs, Nvidia removed the dedicated ray tracing hardware cores.

Basically, the GTX 1660 and GTX 1660 Super are the best bang mid-range graphic card to get at the moment.

They are capable of running games smoothly at a resolution up to 1920 x 1080 smoothly with high/max details with high frame rates. 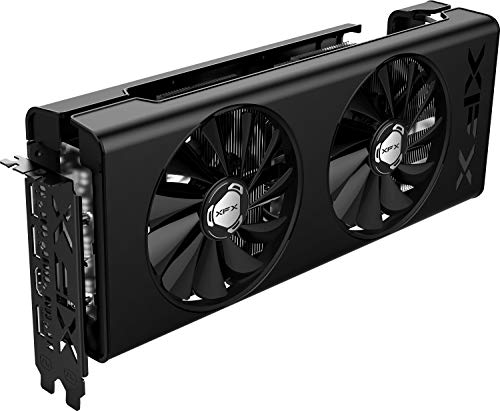 It even trade blows with the $400 GeForce GTX 2060 Super. Even though it is slower overall, this is competitive performance from a $330 card compared to a $400+ card.

AMD Blower V.S. Custom fans:
The Radeon 5700 and 5700 XT below, were launched with AMD stock blower cooler setup. Cooling is adequate, but it is on the noisier side. Newer models, with less noisy custom coolers, are now available. 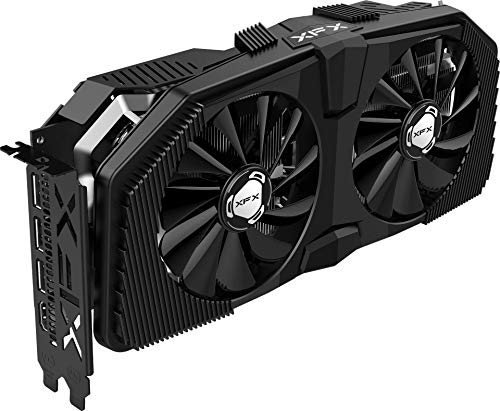 If you’re looking for a graphic card that can keep up with 4K and high graphic details with decent frame rates, the AMD Radeon RX 5700 XT  is a good choice. If you want even more performance, look into the RTX 2070 Super, the soon to launch GeForce RTX 2080 Super or the RTX 2080 Ti below. 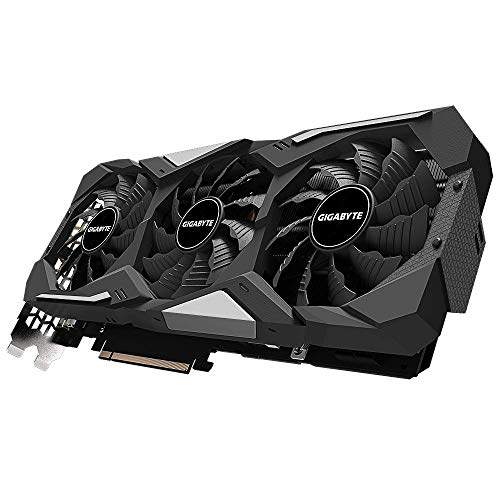 If you’re looking for a graphic card that can keep up with 4K and high graphic details, the Nvidia Geforce GTX 2070 Super is a good choice. Need the best? See the RTX 2080 Super or 2080 Ti below.

AMD offers the Radeon RX 5700 XT, which is 5% slower on average, but also costs $100 less, so unless you want ray-tracing, don’t mind paying more for a more quiet cooling, or want a Nvidia graphic card for a specific reason, the GeForce RTX 2070 Super is hard to recommend at its current price.

It’s the uncontested leader at this price point.

If you’re looking for a graphic card that can keep up with 4K and high graphic details, with higher frame rates, the Nvidia Geforce RTX 2080 Ti is the fastest single-GPU graphic card currently available.

Which cooling system works best?
With a case that has a decent amount of cooling, the open air cooler will be more quiet. In a case with less fans or a small case, a closed cooler is a better choice because it exhausts the heat outside of your case, keeping your other components cooler.

Unfortunately, AMD currently has no product that can compete with the RTX 2080 Ti.

Do you want even more performance? Take the Geforce RTX 2080 Ti, the current most powerful graphic card and buy a second one!

Do you want more performance than what the fastest GPU can offer and don’t mind messing with SLI profiles, not getting a performance boost in VR and sometimes having to wait a bit for SLI support with newer games?

In that case, get two Geforce RTX 2080 Ti and team them up in SLI for even more performance than a single RTX 2080 Ti in games that support SLI.

Remember that you’ll need a NVLink bridge to connect the two card together. Pick the correctly spaced one, depending on your spacing between the cards on your motherboard.

Also, on the release date of a new game, SLI profiles may or may not be ready. Usually available in a matter of days, you might have to wait weeks or months for SLI support.

Note that I don’t recommend 3 or 4 graphic cards in SLI for the GTX 10xx or 20xx series. Games won’t benefit from more than 2 cards, because Nvidia no longer support 3 or 4 way SLI outside of benchmarks such as 3D Mark Fire Strike.

I hope that you enjoyed the latest edition of The Best Graphic Cards For Gaming article.

If you have a question or feedback, I invite you to leave a comment below this article.

A few important recommendations and notes regarding graphic cards:

1- Get the latest version of the graphic card drivers directly from AMD or Nvidia. This will ensure that you get the latest bug fixes and the best performance possible from your graphic card(s).

2- To confirm whether Crossfire or SLI is working or not, use GPU-Z which will show that information to you in the last field at the bottom of the program.

3- SLI Guide: How to enable SLI, check if SLI is enabled, actually working in your game and what to do if it’s not is a great guide from the Notebook Review forums.

4- When using two or more graphic cards in Crossfire or SLI, you want to connect your monitors into the top graphic card, i.e. the graphic card that is the closest to the CPU.

5- Most graphic cards require one or two PCI-Express 6 or 8 pin power connector(s) to be plugged into them to function properly. Make sure that your power supply comes equipped with enough 6 and/or 8 pin connectors for your graphic cards.

Hardware Revolution Founder - Computer hardware expert with 19 years of experience researching, building, fixing and modifying computers. "When I was a teenager, I developed a fascination for PC hardware. I love writing and I enjoy helping people find the best computer hardware possible for their needs and budget. In 2008, with the excellent advanced WordPress customization, technical, security and servers services provided by Marie-Lynn Richard, I launched Hardware Revolution. Click here to learn more about me and Hardware Revolution.

How to choose an Intel CPU: How to differentiate the models

The secrets of choosing the right Motherboard